Every man has a ‘right to reputation’. Defamation is injury to the reputation of a person. As stated in Dixon v Holden (1869) 7 Eq. 488, “A man’s reputation is his property, and if, possible, more valuable, than other property”.

Winfield has defined defamation as “publication of statement which tends to lower a person in the estimation of right thinking members society generally or which makes them shun or avoid than person”. It is not only the injury which a man may himself suffer, it includes any injury to the reputation of his wife, his children or dependants if the injury suffered by them has a direct bearing on the reputation of the man who alleges to have suffered an injury.

Defamation is both a civil and criminal wrong. A person can institute criminal proceedings against the writer or publisher or he can sue him in a civil action for damages in tort for the injury he has suffered. The law of defamation like many other branches of law of torts provides for balancing of interests that is reputation v. freedom of speech. Defamation is a reasonable restriction on the fundamental right of freedom of speech and expression [Article 19 (1)(a) of Constitution] and is saved by Article 19(2).

Mainly because of historical reasons, England Law divides actions for defamation into – Libel and Slander. Slander is the publication of a defamatory statement in a transient form. Examples of it may be spoken by words or gestures. Libel is representation made in some permanent form. Examples – writing, printing, picture, statute (libel is addressed to the eye).

Under Indian criminal law, libel and slander are treated alike, both of them are considered to be an offence. Moreover, weight of various decisions in India is to make slander like actionable per se. The limitation period for filing an action for libel as well as slander is one year. 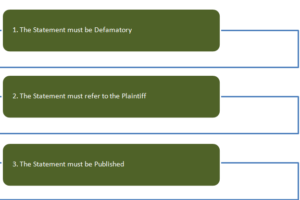 The Innuendo – Sometimes the statement may prima facie be innocent (that is natural or ordinary meaning is not defamatory) but because of some latent or secondary meaning it may be considered to be defamatory. Even a statement of commendation may be defamatory in the context in which it is said. The statement that a lady has given birth to a child is defamatory when the lady is unmarried.

Section 4 of the Defamation Act, 1952(English) lays down the procedure by which an innocent author or publisher can avoid his liability. The defendant must prove: (i) that the words which had been published by him were published innocently. (ii) That as soon as he came to know that these words are published by him resulted in the defamation of the plaintiff; an offer of amends was made. In India, law is possibly the same.

Publication means making the defamatory matter known to some person other than the person defamed. Sending the defamatory letter to the plaintiff is no defamation. It is defamation only if more than two persons are involved. If a third person wrongfully reads a letter meant for the plaintiff the defendant is not liable. It is no publication as it is unauthorized. But if a defamatory letter sent to the plaintiff is likely to be read by somebody else (e.g. – clerk or spouse) there is a publication. When the defamatory matter is contained in a postcard or a telegram, the defendant is liable even without a proof that somebody else read it. 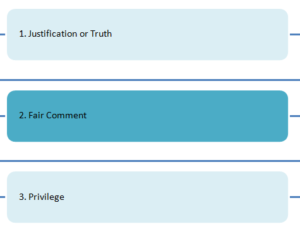 In a civil action for defamation truth of the defamatory matter is complete defense. The reason for the defense is that “the law will not permit a man to recover damages in respect of an injury to a character which he either does not ought not to possess.” The defense is available even though the publication was made maliciously. If the statement is false, it is no justification that the defendant honestly and on reasonable grounds believed it to be true. In Radheshyam Tiwari v. Eknath, the defendant who was editor, printer and publisher of a newspaper published a series of articles against the plaintiff, a Block Development Officer, alleging that the plaintiff had issued false certificates, accepted bribe and adopted illegal means in various matters. In an action for defamation, the defendant could not prove the facts published by him were true and therefore, he was held liable.

It is generally a defense available to authors, editors, critics, etc. it is critical appreciation of existing facts and not invention of new facts. Further, the comment must be ‘fair’ that is without malice. Finally this comment must be in public interest. Administration of Government departments, public companies, public institutions and local authorities, public meetings, pictures, theatres, public entertainment, text books, novels, etc. are considered to be matters of public interest. ‘Comment’ means an expression of opinion on certain facts rather than making a statement of fact. A fair comment is a defense by itself whereas if it is a statement of fact that can only be excused only if justification or privilege is proved regarding that. In Tushar Kanti Ghosh v.Bina Bhowmic, the Amrit Bazar Patrika published a news item which contained statements like ‘day light robbery’ which were factually incorrect. As they were untrue statement of fact, the defense of fair comment was defeated.

There are certain occasions when the law recognizes that the right of free speech outweighs the plaintiff’s right to reputation: the law treats such occasion to be “privileged” and a defamatory statement made on such occasions is not actionable. Privilege is of two kinds: Absolute and Qualified Privilege.

It is an absolute defense as under it no action lies for the defamatory statement even though the statement is false or has been made maliciously. It is recognized in ‘Parliamentary Proceedings’, ‘Judicial Proceedings’ and ‘State Communications’.

In certain cases, the defense of qualified privilege is also available. Unlike the defense of absolute privilege, in this case it is necessary that the statement must have been made without malice. For such a defense to be available, it is further necessary that there must be an occasion for making the statement. Generally, such a privilege is available either when the statement is made in discharge of a duty or protection of an interest, or publication is in the form of report of parliamentary, judicial or other public proceedings.